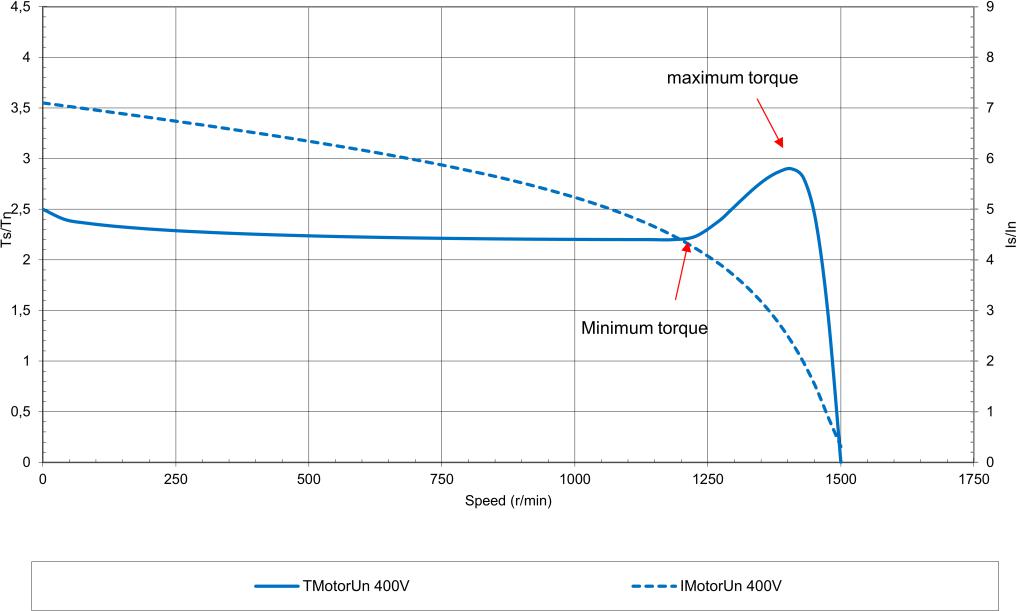 Stands  for  starting  torque, the starting torque is the torque that the motor shaft is able to deliver at zero speed while  Tn
or nominal torque is the torque the shaft deliver at nominal speed in order to achieve the rated power of the motor.
During the ramp-up of speed, the value of the torque changes. Depending on the rotor slot design and materials used the form of this curve can also vary.
Ts Or starting torque as explained above. In addition to this, there is also minimum torque or pull up torque, meaning the point on the starting torque curve with the lowest value. This point is usually the factor determining if the motor will be able to start when the load from the application is applied.
Also we have the maximum torque or break down torque. This is the highest point on the starting torque curve. As the motor is in continual running you can overload it to the limit of the maximum torque before it stops. This would only be possible for a short time in practice as it will make the motor heat too much if overloaded during a longer time.
Is stands for starting current and is the number of ampere drawn by the motor from the network at the time of the start before the shaft has started to turn. In or the nominal current is then the current drawn from the network at full speed when loaded at its rated power. The starting current curve falls as the speed of the motor is picking up, this is due to the rotor finding its place in the rotating magnetic field in other words the motor is decreasing its slip. During the start the motor needs a lot of current to magnetize the rotor but as the speed picks up the need of magnetizing current decreases. 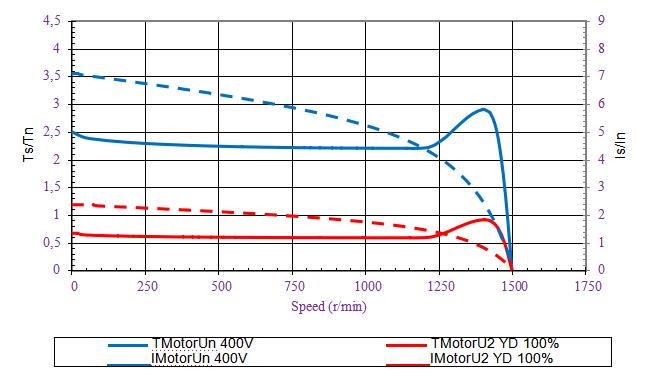 A Variable speed drive is a device that can change both frequency and voltage used by the motor. So like a soft starter but instead of adjusting the voltage only, it also has the possibility to adjust the frequency of the current at the start.
As the variable speed drive can adjust both voltage and frequency it means that it can keep the electromagnet flux inside the motor constant, so it does not lose any of the motor torque during the start. This means that it can use the nominal torque of the motor already from zero speed and at the same time it can limit the starting current of the motor to its nominal value.

This makes the variable speed drive the most versatile of all the starting methods. It also gives an additional feature to control the rotation speed of the motor. (Electrical4u)

Emma: May I help you?

No Thanks Chat Now